Without investing in the health and wellbeing of the next generation, we have no hope of achieving food security, says the World Food Programme’s Carmen Burbano.

Even before the pandemic “there was already a global learning crisis,” says Carmen Burbano, head of school feeding at the World Food Programme (WFP). “Children were in school, but they weren’t learning much. They weren’t able to read or identify a simple text by the time they were 8 or 10 years old. So, we knew already back then that in low-income countries, particularly, we had a problem of children being in school but actually not being able to learn much.” 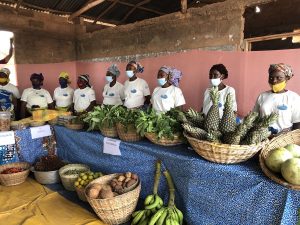 These problems have only gotten worse during the pandemic. Children in low-income countries have lost more than two years of schooling. During the pandemic 370 million children missed out on meals and essential health services due to school closures. Today, 150 million students still don’t have access to meals.

“We are looking at potentially generations of children that will be lost, that will never come back to school, especially girls,” says Burbano.

As the world marks International School Feeding Day, preparations are already under way for the UN’s Transforming Education Summit in September. Part of that, for WFP, is seeking to challenge what Burbano calls “a systematic neglect of the health and nutrition of kids throughout their school age in low-income countries”.

In contrast, “countries that are not investing, in education, in health, in nutrition early on, will be losing productivity in the future. In low-income countries, only about 30 percent of their wealth comes from their people. The other 70 percent aren’t really in a capacity to be productive and to contribute much.”

It takes a holistic approach “to provide a decent standard of living for everybody”, she says. “And it’s not just the education sector that needs to care about this. It’s the responsibility of many sectors that need to come together – the health sector, social protection, agriculture.”

School meal programmes is where all these sectors intersect. They do more than provide food. They can support local agriculture and markets while simultaneously improving health, nutrition and education, making communities more resilient.

Governments have a key role to play if we want these investments to be sustainable, says Burbano. “WFP can do what we can do for a few years – we can do it even for a few decades. But we can’t cover whole countries. We’re stopgaps and we support, especially in some of the most vulnerable areas.

“This means domestic budgets and policies. And those are decisions that need to come from the top.” The School Meals Coalition is testament to the growing consensus around this issue. Launched last November and led by governments, the initiative already has 61 country members.

African countries account for more than half those signed up to the School Meals Coalition, with most notably the presidents of Benin, Rwanda and Senegal recognizing the importance of investing more deeply in human capital, says Burbano.

To mark the African Day of School Feeding last week, African governments committed to increasing domestic financing for school feeding programmes to regain where things were before the pandemic.

Even where programmes are mature and established, there are opportunities to revisit what children are eating, making sure they receive healthy, diverse, locally grown food. We can shorten supply chains, make the programmes more sustainable and at the same time engines of local growth and job opportunities, says Burbano.

“Then we are well underway into a kind of a revolution, transforming food systems and children’s lives at the same time.”

When it comes to school meal programs, flexibility is the name of the game. Programs appear in various modalities, from in-school meals and/or snacks, to take-home rations. Learn more at gcnf.org/global-repo… #talkschoolmeals #schoolfeeding @SchoolMeals_ @IFPRI @IntSchoolMeals pic.twitter.com/ROfN…

Did you know that the first Ministerial meeting of the School Meals Coalition Task Force took place this week, in Finland? Click here to access all the sessions via @SchoolMeals_ YouTube channel: m.youtube.com/c/Scho…

Today! 👇 Join @UNESCO & @UNICEF at #SchoolMealsCoalitionWeek to discover highlights from the new report: 'Ready to Learn and Thrive: School health and nutrition around the world' Our Director Prof. Bundy will be discussing how the report links to our wider research agenda. twitter.com/R4School…

We’re starting today the School Meals Coalition Week Day 1 | Peer2Peer Learning A day to hear from Countries and their partners – lessons learned from yesterday that could be applied to tomorrow. Join the sessions of the day events.zoom.us/e/vie… pic.twitter.com/86fR…

🌟10-14th October is the first ever School Meals Coalition Week 🌎5 days of virtual programming led by Research Consortium for School Health and Nutrition members & partners from around the world Learn more about the week and events ➡️schoolmealscoalition… #talkschoolmeals pic.twitter.com/UMkU…

The 2022 School Meal Programs Around the World report has been released! Browse chapter by chapter or read the whole report at survey.gcnf.org @USDA @WFP @FAO @foodbanking @IFPRI @HealthEduRes #SchoolMealsAroundtheWorld pic.twitter.com/NKnW…

#SierraLeone 🇸🇱 Kudos to the teams and collaborators who work on our home-grown school feeding programme 🙌🏽 @WFP @SchoolMeals_ @IntSchoolMeals twitter.com/WFP/stat…

2022: Fun creations at lunch in a school in England2022: Get to know the school lunch programme (USA)